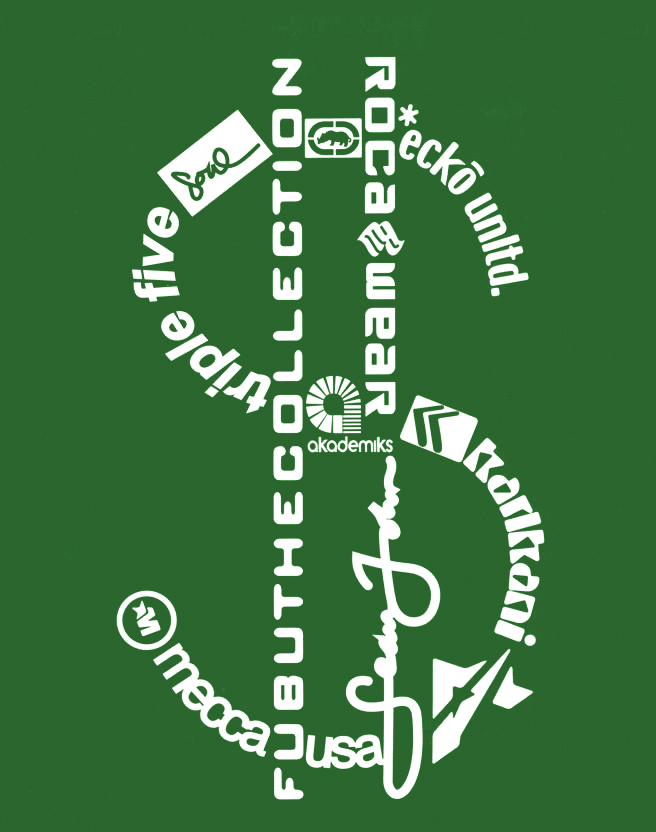 READY TO WEAR
Beyond baggy jeans and oversized tees, urban clothing lines have diversified their collections and gone upscale, offering perfumes, dress suits, and cashmere sweaters. The former backwater of the apparel industry is now a high-growth competitor in department stores nationwide.


The first thing that attracted Nadia Rousseau, a Brooklyn high school senior, to her boyfriend, 19-year-old Jamil Jackson, was his outfit. "It was his Leather Rocawear varsity jacket," she confesses with a giggle. It had black leather sleeves and "Rocawear 1945" emblazoned on the back. The gearwas on point, so naturally Rousseau was interested.

She isn't the only one. Now, mainstream retail execs are falling for urban fashion. "We've seen explosive growth," says Randy. Heil, men's fashion director of Macy's West, a division of Federated Department Stores. The category is now a $2 billion-a-year business. And while larger, established lines like Tommy Hilfiger and Calvin Klein are feeling the effects of the recession and closing stores, popular urban brands are doing better than ever: In 2001, Fubu had sales of $380 million; Phat Farm, $300 million; and Ecko Unlimited, more than $200 million. Last year, Sean John racked up $250 million.

Hip hop-inspired labels date back to the late '80s and early '908, when Cross Colours and then Karl Kani debuted their oversized and brightly hued merchandise at specialty stores in the 'hood (see Domepiece, page 84). But pitfalls such as overdistribution and underfmancing brought Cross Colours to an end in 1994. Karl Kani is still thriving, with a sales high of $77 million in 2001.

Their successors have reached critical mass selling to customers outside of rap's young, urban core demographic. No longer limited to inner-city chains, these lines can be found at many suburban mall anchors like Macy's, Bloomingdale's, Saks Fifth Avenue, and J.C. Penney, as well as freestanding flagship boutiques. "More than half the people who wear urban fashion brands are in fact people who never spend a great deal of time in the city," says Rob Callender, trend manager for Teenage Research Unlimited, a market research firm in Northbrook, Ill., "and wouldn't know what to do with themselves if they were suddenly transported there." Rocawear CEO Damon Dash puts it more simply: "Urban lines are colorless now."

Star power plays no small part in moving merchandise across old barriers, Hip hop celebrities who possess great fashion instincts, business savvy, and hefty bankrolls such as P. Diddy with Sean John and Russell Simmons with Phat Farm have legitimized the urban apparel market in the eyes of the Fashion Avenue establishment. The new urban moguls know that it takes more than a successful recording career to make the fashion crossover. Chuck D's Rap Style was the first artist-branded rap clothing line and had a good five-year run, but had to shut down in the late '90s due to financing and distribution difficulties. Vinnie Brown of Naughty By Nature had better luckwith his apparel line and retail store, called Naughty Gear, in Newark, N.J. But both would turn sour as conflicts with the licensee and stiff retail competition forced Brown to go under in 1999.

Beyond celebrity and cultural appeal powerfully projected in music videos and other media demographic trends are favoring the urban fashion business as the U.S. marketplace grows more racially and ethnically diverse. "The younger the U.S. population segment, the more likely it is to include minority consumers," says Lois Huff, vice president of Retail Forward, a market research and consulting firm in Columbus, Ohio. The African-American and Latino population combined has an estimated spending power of $950 billion annually, and teens of all races whose purchasing clout makes hip hop such a force in the music industry spend more than $22 billion on fashion each year.

For core consumers like Jackson and Rousseau, it's not about celebrities or business models. They love the products that represent their lifestyles. "We're going to buy hip hop brands," says Jackson, "because they're catering to what we want: loose jeans that aren't so wide that they hang at the bottom of our boots, the waist just right so it doesn't look tight. They understand exactly where we're coming from on the fit."

And by the look in Rousseau's eyes, the girls like that, too.