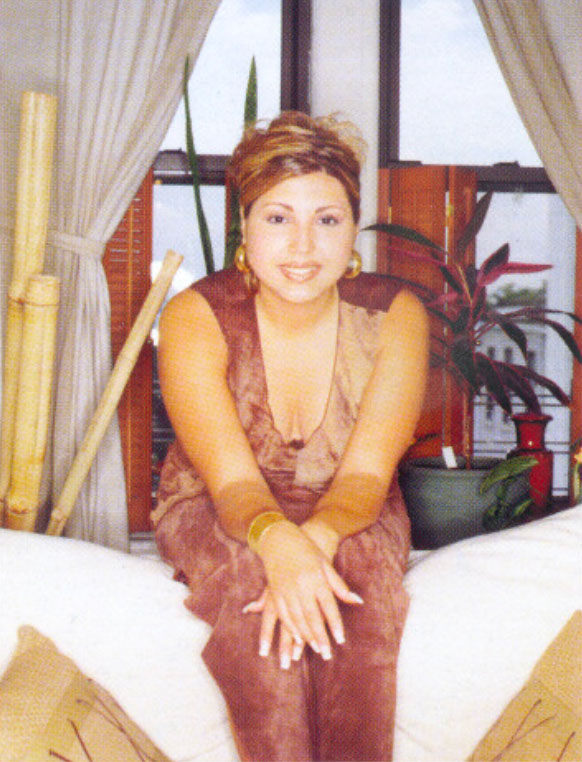 Her reviews in DNR and WWD magazines can make or break new designers. Mega-hundred million dollar businesses like Phat Farm, Ecko Unlimited and Sean John fear her witty columns. She gets wined and dined by the most respected Seventh Avenue fashion houses. She even covers the skate scene. Her influence in the urban fashion business is immense. And she's got big plans. So why do so few people in the business really know the sassy boriqua morena hiding behind the byline?

TRACE: How did you get into the urban fashion end of journalism?

ELENA: It was a little bit of fate, timing and instinct. Just as I was getting my feet wet as a fashion journalist, I stumbled across an uncharted territory - the urban fashion market. While youth fashion has to some degree or another, had importance in fashion, urban fashion, because of its newness to the market, was not a subject on every journalists writing agendas. That was early 1996. It was a great time for me, and the market. I was finally getting my big break in the field I felt I was destined to suc-ceed in and the market was finally being addressed/depicted from a knowledgeable point-of-view for one because I understand the market because I can fall under that umbrella, age, demographic and music wise. I happen to be a journalist who listens to hip-hop, among other things.

As the market got its momentum, I was lucky enough to be there to document it.

Name one occasion where you saw that urban fashion was changing the way young people think.

It still amazes me how hip-hop culture has gone mainstream. I wonder many times if its founders ever imagined that it was go this far.

It really hit me early on ifs my fashion journalism career. I remember breaking one of my biggest "page one" stories at DNR. I had only been at Fairchild for nine months. The story ran December 19, 1996. Back then we [DNR] were a daily newspaper. The headline read 3Federated May Hop on Hip-Hop YM [young men's] Trend. At press time, Federated did not return my calls but I had enough quotable sources to break the story. It was really the first time a major department store had ever decided to really get into the urban business. It was a risky shot but its been to one degree or another, paying off for them. Prior to that, the only other major chain to take on the urban market had been the now defunct Merry-Go-Round Enterprises in the Cross Colours days. That was the market's first real taste of success and failure.

Give me an instance of a situation where you saw that your power as a critic made a real difference to an established business.

Being a journalist is a love/hate kind of job. There are those who love us because we happen to write a story that benefits them and then there are those who hate us because the story causes people to think and at times, react in a way that negatively affects the subject. As journalists, we are just the messengers. We tell a story and it's up to the readers to make up there own minds as to what truth really is. Good journalists provide all sides.

In my six years covering fashion at Fairchild, I've got tons of stories. One that stands out in my mind is my review of Rocawear's first and only 7th on Sixth presentation, I wrote the review the way I saw it, plain and simple. As a fan and as a fashion critic, I was disappointed. If I wouldn't say it any other way, those who know me as a jour-nalist would've thought I was not being me. The result: my response to their reaction and eventu-ally the real reason why I'm in this business revised its line and I think the market found a new level of respect for me because I had the guts to tell my readers exactly what I was thinking.

How did you grow up, as a young Latina in NYC?

I grew up like many first-generation Latinos whose upbringing is deeply rooted in family, cul-ture and traditions. I grew up in a predominately Puerto Rican neighborhood [at the time] in Brooklyn, where I was born and raised. My_ mom, who was raised very traditionally, like many women of her time, decided to teach me tradi-tion as well as a new school of thought. My mom has always wanted roe to be the best person I can be. I try to do that every day and pass that message forward.

An education and career were two things she taught me to strive for. I always knew what I wanted to be: a success. Like most kids, I had a lot of answers to the famous question 'What do you want to be when you grow up?" At first, rwanted to be a veterinarian because I love ani-mals. Then I wanted to be a fashion designer because I loved to draw and I'm a fashion connoisseur. It later changed to an architect and finally to a journalist. My English teacher saw that in me, at the time, and helped me see that was my calling for myself at 14.

Who are the designers and individuals who stand out as truly creative, in your opinion?

There are a lot of people in my eyes that have great creative talent. I could rattle off to you a laundry list of people who stand out in my mind for one reason or another. As for who the consumer would recognize in youth fashion it would be names like Mark Ecko and Bob Hurley of Hurley International. Then there are a ton of other creative designers that don't always get the public recognition they deserve. For instance, the president of Ecko Seth Gerszburg; CEO of OP, whose put OP back on the map; Neil Mossberg of World Marketing; the founders of Zoo York, Dave "Panty Man" Cohen at Undergirl; the entire creative and management team at Sean John, especially the dynamic trio: Jeff Tweedy, Theresa Scott, and newcomer Tim Bess; my people at PNB Nation for always sticking to what they believe in; the talented designers such as Anton of Shapes. Anton, who specializes in custom-reversible apparel, and guys like Omar Jermaine, who has designed for just about every urban brand you can think of and now has a blazing clothing line of his own called Flat Iron, to others like Donwan Harrell of Akademiks. As far as creative companies that are cutting edge, I'd have to say Prada, Diesel, Evisu, Kenneth Cole, Coach, Enyce, Mecca, Triple 5 Soul, Phat Farm, Rookie, Zoo York, Volcom, Paul Frank, Domepiece and Star Tea Company.

How do you intend to use your expertise in fashion to gain a bigger voice?

I don't. Fashion is just one of my many specialties and something I enjoy very much. My dossier is a clear indication of that. Fashion just happens to be where I got my foot in the journalist world. Time will tell when my other talents will help me gain a bigger voice. My philosophy for being in my line of business is simple: to leave no questions left unanswered.

My colleagues have often joked that I am one of the hardest working girls in fashion. I'll leave that up to you and your readers to decide. To sum up what I do, I simply say I'm an insider. While my day starts at 10:00 am in the office, it goes on "until." Until, meaning until the job gets done. That could mean 6:00 pm to the wee hours of the morning. It all depends. You'll always catch me on the phone, working on getting a good scoop. And when I'm not, I'm working on future magazines/issues. My position at DNR allows me to do a lot of things, both creatively and business-wise. I'm an entrepreneur at heart and I have been fortunate to be given the opportunities to explore that and be able to bring forth new ideas to fruition. I do a little of everything, nuts and bolt - from writing, to planning to the launching new products. In my case, the youth version of DNR called Next, which is going on its third year anniversary to building it into a brand by presenting its branding extensions. I also am a contributing editor to WWD, where I contribute celebrity and fashion lifestyle stories.