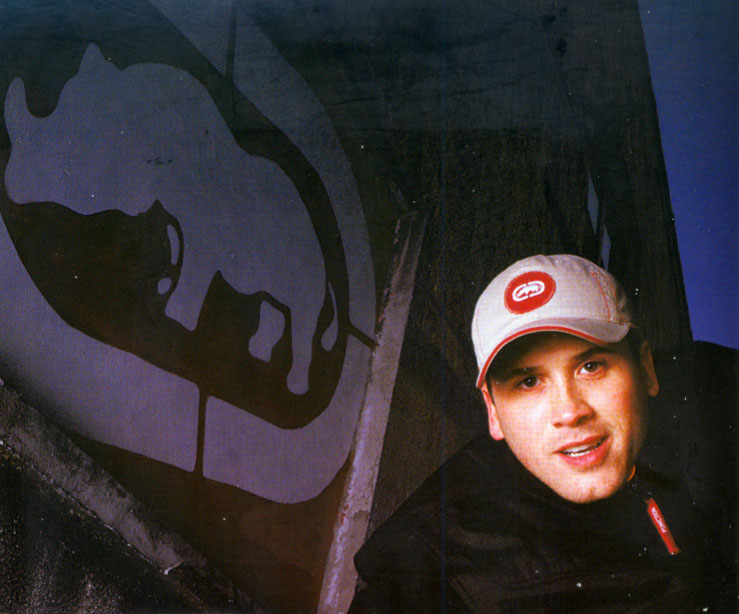 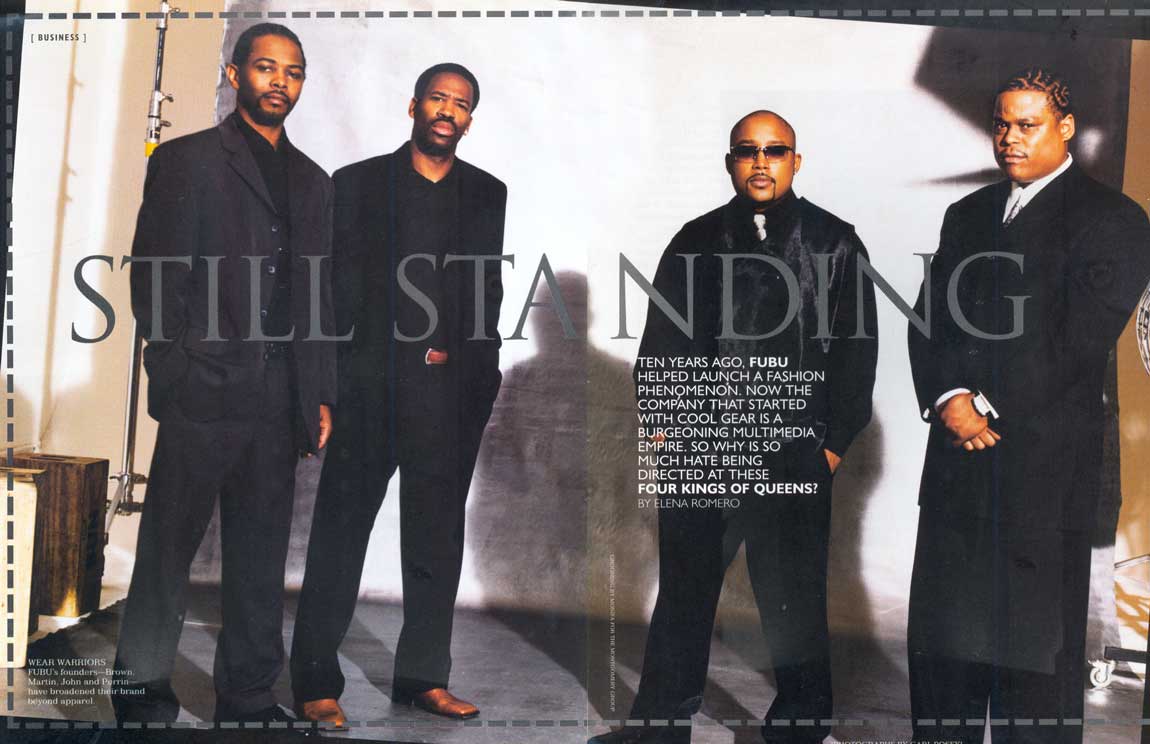 STILL STANDING
Ten years ago, FUBU launched a fashion phenomenon. Now the company that started with cool gear is a burgeoning multimedia empire. So why is so much hate being directed at these four Kings of Queens?


Imitation may be the sincerest form of flattery, but don't tell that to the FUBU crew. The pioneering urban fashion company was recently awarded $6.7 million by a U.S. district court judge for damages in connection with a trademark suit against a company called Solid Clothing Inc. Several other trademark infringement cases are still pending against companies such as WalMart, Abercrombie & Fitch, The Children's Place and Charlotte Russe. "They only bootleg you when you're popular," says Carl Brown, one of the company's four founders, as he sits around a conference room table at FUBU's modest headquarters inside New York's Empire State Building.

"Yeah," says CEO (and co-founder) Daymond John, with more than a tinge of sarcasm. "But they've got your money, so I don't know if it's flattery or not. I'm not flattered when someone breaks into my house and steals something."

That any company would want to pilfer anything from FUBU may come as a shock to those who believe the 10-year-old company has lost some of its hotness with the fickle hip-hop customer. In truth, FUBU (For Us By Us), the company founded by four young men from Queens, N.Y. - Brown, John, J. Alexander Martin and Keith Perrin remains atop the booming and extremely competitive urban fashion industry, a business with an estimated $58 billion in sales. It has done so by being responsive to the needs and desires of its ever-changing market and by leveraging its brand into numerous fashion niches. Brand extensions include Platinum FUBU and FUBU Ladies, and products include footwear for both men and women, swimwear, watches, suits, ties and fragrances, as well as children's apparel and a home collection. More than 5,000 stores carry FUBU products, including major retailers such as Macy's, Foot Locker and FootAction. FUBU also owns its own stores in Japan, Germany, France, England, Australia, Mexico, South Africa, Saudi Arabia, Greece, Lebanon and Barbados. In the last two years, the company acquired licenses to produce apparel featuring cartoon characters Fat Albert and the Junkyard Gang as well as such cultural icons as Muhammad Ali and the Harlem Globetrotters. Company officials for the privately held firm refused to give sales figures, but industry sources peg FUBU's sales last year at more than $350 million.

Despite success and longevity, the company is at a crossroads. Word on the street, the heart of its market is that FUBU isn't the hottest brand around right now. There may be no single winner in that category, but there are plenty of competitors, including Ecko Unlimited, Sean Jean (R Diddy's popular label), Rocawear (co-owned by Roc-A-Fella's Damon Dash and Jay-Z), and Akademiks. The trash talk aimed at FUBU - most often indirectly - has come from player-haters in and outside of the industry. Anonymous haters, of course.

"Nobody would ever be obvious about the hate because it's four black guys out of Queens," says John, who is stocky with a baby face. "If any designer ever said, 'I hate those 1- four niggas from Queens,' that would be self-destruction for them."

The rapid growth of such competitors as three-year-old Rocawear and Scan John, which was founded THE NEW MAINSTREAM in 1999 and earned about $101 mil - Once sold from a founder's home. lion in sales last year, according to FUBU is now a must-have staple in major retail stores worldwide. industry sources, is no surprise to John. "A lot of these cats had money come from somewhere else, so they had millions of dollars that they could pour into a company," he says, referring to the influx of entertainers-turned-fashion-entrepreneurs. "It's only natural for them to try to capitalize on [their celebrity]. There are millions of investors out there just looking for somebody to throw their money behind [somebody who's] popular and [whose fans] they think they can sell to in order to make [money]."

Though Brown, John, Martin and Perrin have achieved a modicum of celebrity, they're no P. Diddy. No matter, say many retailers. Industry veteran Izzy Ezrailson, president of the Washington, D.C.-based chain Up Against the Wall, believes FUBU remains strong and has staying power. "FUBU, when it is fresh, picks up its customers and reinvents itself continually," he says.

As it keeps on trying to do. "Everybody else is basically a clothing company," says Perrin. "We're like a brand." Indeed, FUBU is widely recognized well beyond the apparel industry. That's what the crew is counting on to help the company avoid the fate that befell a fellow pioneer in urban fashion, the now-defunct Cross Colours. To that end, FUBU's corporate umbrella now includes ecommerce and entertainment (film, music and television) divisions, and a yet-to-be created advertising agency. FB Entertainment was launched two years ago to handle TV, film and music projects. Last September, the music division kicked off with the release of The Goodlife, a compilation CD distributed through Universal Records. It featured multiplatinum artists LL Cool J and Ludacris, and was given frequent radio and video air-play, primarily on the strength of the single "Fatty Girl," which-talk about synergy-is also an apparel brand within the FUBU Ladies line. This past July, FUBU signed a deal with Koch Entertainment Distribution to launch a new label, FUBU Records. "We are in the music just like when [we started] we were into the design FUBU," says Brown, CEO of FUBU Records. "We sit here [for] hours, right here."

Forthcoming releases include an album from New Orleans-based rap group 54th Platoon and a new compilation CD. FUBU Records intends to continue releasing albums from artists within the hip-hop, R&B and soul genres. In addition to 54th Platoon, the label's current artist roster includes The E.N.D. and Drunken Master. Upcoming film projects include The Crow Lazarus - a sequel to the late Brandon Lee flick The Crow - which is being produced in conjunction with the Edward R. Pressman Film Corporation. FUBU will serve as executive producers. No television projects are in the works, and the advertising agency is little more than a notion. The agency has yet to set a launch date and currently has no clients.

That is a laudable accomplishment for four young men who "started from nothing," says John. While shopping for a hat with Brown in Chinatown a decade ago, John realized that no shops had what he was looking for. Rather than becoming dismayed, he decided to make and sell his own tie-top hats. At the time, John was working for Red Lobster; Martin, just home from fighting in Desert Storm, was attending the Fashion Institute of Technology in Manhattan and working at Macy's; Brown was working at various odd jobs; and Perrin was managing apartment buildings in Harlem. John obtained $100,000 by mortgaging his home, and then transformed the place into a factory. But the crew's key move -indeed, life-changing - was their decision to place an ad in The New York Times and Daily News classified sections. It said that a young men's sportswear company had recently gained "300,000 worth of orders" at The Mirage hotel in Las Vegas while the fashion industry's largest trade show, MAGIC International, was being held a few miles away It went on to say the company was "seeking backing." The ad caught the attention of electronics giant Samsung America, the tenth largest corporation in the world. Funding the company's production and distribution efforts, Samsung's investment - FUBU officials won't say how much - allowed FUBU to be born.

"It was four of us," recalls Martin, a vice president and the most stylish of the crew. "It wasn't just one guy trying to design stuff. I think, virtually, it was Keith, Carl, Daymond and myself being different people and liking different things."

The crew's next key move was convincing a longtime friend, LL Cool J, to become FUBU's first celebrity endorser. The rapper - now actor and producer - agreed, and later mentioned FUBU in his book, wore their clothes in movies and videos, and even slipped their name into a television commercial for the Gap.

The recent speculation, rumors and hate regarding the state of FUBU - the level of testosterone in urban fashion, after all, may only be surpassed by that in the music biz - may not have deterred the crew, but it hasn't gone unheard. "A lot of black people come up to us and say, 'How's business? You guys all right?'" says Perrin.

"I think that we were at our height when there was nobody else.... That's hard when you're on top," adds John.

Clearly FUBU is content with where it is and where it's heading. "Even though at certain times we still hold the No. 1 slot and maybe [the] No. 4 slot," says John. "If we went down to No. 7 or No. 8, we could care even less as long as we're doing something. I'd hate to be No. 7 [or] No. 8 [and] doing things like for skateboarders, things that are not natural to us. But if we're doing what we're cool with..." For now, the crew is cool with a multitude of diversions. Brown wants to start scuba diving; Martin hopes to design a couture collection; and Perrin will continue to pursue acting. He's already appeared in two films: Noon Blue Apples, which was shown at the Sundance Film Festival this year in Park City, Utah, and Gully, in which Perrin acted alongside Tyson Beckford. Gully was released in August at the Urbanworld Film Festival in New York. Perrin is training under acting coach Tracey Moore-Marable, whose clients include Eve and Busta Rhymes.

As for John, he hasn't quite decided: "Going public is always a consideration 'cause again, [consumers] want to know 'How can I get a piece of that?' I got love for the business. Where we go from here, you never know."