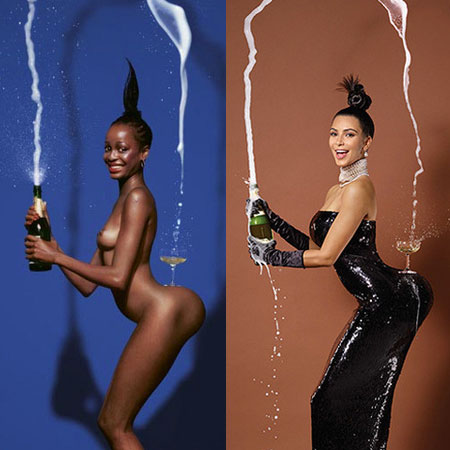 THE BUTT REMIX:
Beauty, Pop Culture, Hip Hop, and the Commodification of the Black Booty


What was once historically deemed grotesque has now become the newest fashion statement, whether obtained naturally or cosmetically across racial and sexual lines. Strip clubs, "pumping parties," and hip hop can be thanked for playing an instrumental role in bringing attention and awareness to what is now considered the "perfect ass."

Although deemed the ultimate fashion accessory, many have seen this to be problematic and a growing form of objectification, stereotyping, and exploitation. It has become the latest gentrification of body parts. There are those who disagree with this argument and support the argument that there's nothing wrong with a mere enhancement or modification of their most socially desired body part. It's the mentality of working with what was already there whether it's giving it a nip, tuck, lift, or complete makeover.

To examine these ideas, one needs to go back to the days of South African Sarah "Saartjie" Baartman, a Khoi woman who was freak show exhibition billed under the name Hottentot Venus ("Hottentot," a derogatory name referencing the Khoi people and "Venus," a reference to the Roman love goddess) during the nineteenth century in Europe. Her public mock exhibition in a tight body stocking, animal skins, and face paint only reinforced the stereotype of African women as savages, primitive and grotesque. Her derriere and other physical attributes were considered a freak of nature. On the other hand, her body's unique characteristics also made her an objectifying wonder as well as desired. These human contradictions are commonly seen today with the adoration of butts in America, although the American perception, across racial lines, is that the bigger, the better. Those who have partaken in the surgical enhancement procedure discuss booty as a new fashion norm rather than a commodification of the "black booty."

In her article, "Hottentot 2000: Jennifer Lopez and her Butt," scholar Magdalena Barrera, goes into great detail on how American society became fascinated with derrieres. Barrera shows that the butt is the one body part that everyone focuses on sculpting in part because the buttocks have ever-changing symbolic value. They are associated with the organs of reproduction, with the aperture of excretion, as well with the mechanism of locomotion through discussions of gait. They never represent themselves... When aesthetic surgery is performed upon the buttocks, it is to enhance their sexual attraction.

Should one "fail" to discipline one's body and meet the standard of mainstream beauty, not only does society deal punishment, but one is compelled to take action as well, particularly in Hollywood entertainment circles.

For decades, hip hop has promoted its affinity for the derriére in vivid visuals and explicit lyrics. "When you had LL's Big Ole Butt, Sir Mix-A-Lot and Luke with [stripper-like] girls shaking their butt, those songs have the greenlight for women to embrace their bodies," explains the female member of The Funky 4+1 More, MC Sha Rock. "[Early hip hop] wasn't about showing off the body but what you paid for the gear you put on. With songs out that embrace the body and fullness is where hip hop was making a turning point."

Deejay/producer Pete Rock sees a number of factors bringing the booty conversation back into the spotlight. "The younger [millennial] generation is making booty an issue," believes Rock. "Selfies of the body pushed the booty craze. It produced people like Kim [Kardashian]."

Rock, like many hip hop personas, also attribute its glorified popularity to strip clubs. He refers to strippers as "hood stars." Enhancements could only bring them more money, fame, and notoriety. Music director and veejay Ralph McDaniels, of the famed music video program "Video Music Box," agrees with Rock. "The culture of hip hop is in the strip clubs, it's become heightened by the whole strip club phenomenon in the South. It became popular in Atlanta and Miami. That's where people break music down. You want a hit, break it off in there." According to McDaniels, music makes people want to shake their butts. "If you got it or create it, you can now 'drop it like it's hot.' If you didn't have it, you can get an implant or injection and drop it like it's hot like the black girls." McDaniels is alluding to the acceptability of black aesthetics by Caucasian women as seen by the Kardashian sisters. As Keeping Up with the Kardashians took off, the personification of white beauty encompassed more of what had been traditionally looked at in mainstream beauty and pop culture as an essentialized black aesthetic. Kim Kardashian’s intention to break the Internet with her shock paper magazine cover of her naked derriere was featured in Paper magazine (2014). A remake of a 1976 Jean-Paul Goude photoshoot called "Carolina Beaumont" referred to as the "champagne incident," featured the 34-year-old reality star completely naked. The cover's reaction was mixed, but predominately full of jokes, memes, and outright appropriation.

Talk of big derrieres became the norm for the Latino community with La Vedette de America Iris Chac.n. But it was Bronx-born Jennifer Lopez (a.k.a. J. Lo), who became hip hop’s darling and brought the butt conversation to new heights. From being featured as a Fly Girl on Fox's "In Living Color" in 1991 to her 1997 breakthrough performance of Selena (the late Mexican singer also known to have a big bottom), the fascination with rears has never been the same. In J. Lo's case, her big culo brings about discussions of racial ventriloquism, setting off both white and black comfort with this performance.

Booty lyrics have made the pop crossover. Nicki Minaj's put butts in plain view in "Anaconda" and on her The Pinkprint album cover, whereas J. Lo and Australian Iggy Azalea pay homage to "Booty." In the Moguldom Studios documentary Bottoms Up, Marielle Bobo of Ebony states, "With the Nicki Minaj's and K. Michelle's, you are seeing this super exaggerated version of the big butt. The tiny, tiny, tiny waist, crazy hips, crazy butt and in a lot of those cases, that's not really how these women are. It's almost cartoonish, an exaggerated hour glass shape."

As female celebrities are joining in the butt conversation, only time will tell how the power of the booty will play out. Although the beauty culture has "gentrified" the booty out of its marketability, the beauty culture has not necessarily changed for black and brown women who have been and are marginalized except when it's conveniently profitable.